New Jersey State Police Troop “C”, serves the central jurisdictional portion of the state, with its headquarters located in Hamilton Township, Mercer County. It covers from the Delaware River on the west portion of the troop, across the state to the Atlantic Ocean on the east coast. The total area of coverage is 2,806 square miles, with a population of approximately 3.4 million people. The Troop consists of five (5) stations which are divided into three (3) regional operation areas. Region One consists of the Hamilton-Sub Station, Red Lion Station and Tuckerton Station. Region Two consists of Bordentown Station, and the Kingwood Station. Region Three consists of the Office of State Governmental Security (OSGS).

The five (5) Troop “C” Stations are responsible for police coverage for twenty (20) municipalities in seven (7) counties in central New Jersey, as well as patrolling five (5) State Highways and 430 miles of three (3) major Interstate Highways, namely I-95, I-295, and I-195. There are five (5) Delaware River bridge crossings located in the Troop “C” area which are primary bridge responsibilities of the Hamilton-Sub Station and Kingwood Station. Troop “C” has twenty-two (22) Troopers assigned to four (4) Tactical Patrol Units whose function is to patrol and enforce motor vehicle and criminal violations throughout central New Jersey. There are also twenty-two (22) Criminal Investigation Office Detectives who handle all criminal investigations in Troop “C”. Upon request they also assist other police agencies located in central New Jersey. 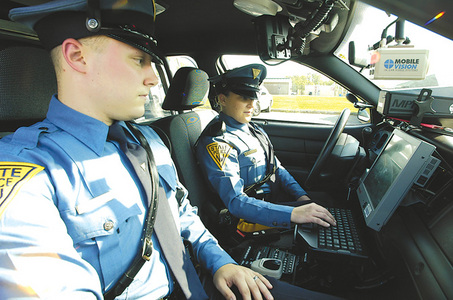 The Troop handles all major criminal investigations which may occur at any of the four (4) mental health facilities located in Burlington County, Mercer County, and Monmouth County.

Located in Troop “C” is the Great Adventure Six Flags Amusement Park. Personnel from the Troop are assigned there several times a season to assist with traffic and crowd control, especially during high profile music concerts and shows.

At the direction of the Troop “C” Region III Commander, the Office of State Governmental Security ( OSGS) organizes, directs ,manages and reports the activities of the Security Operations Unit, the State House Complex Security Unit, the Investigations Unit, and the RJ Hughes Justice Complex Security Unit. The Office of State Governmental Security has formulated a layered security approach that effectively combines training, policy, procedures , and physical countermeasures to reduce the vulnerabilities associated with both street crimes and terrorism. The OSGS also provides security for the Adventure Aquarium in Camden, and two (2) state buildings located in Newark and Jersey City. This facilitates the flow of information to and from the various units supervised, and serves as a conduit for communication with other Division entities. They also process and issue permits to gather or use amplification equipment in or around state regulated buildings and grounds. OSGS is committed to providing security and protection to visitors, employees, and property within the State Capital Complex. These critical services are provided in a professional, unbiased, and courteous manner. Realizing the importance of building agency partnerships, OSGS members are dedicated to the concept of service oriented policing.